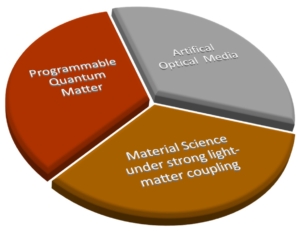 Research in the Laboratory for Nano and Micro Photonics (LaNMP) can be best summarized as exploration of light-matter interaction at the nanosale. We are interested in exploring emergent material properties (classical and quantum) that arise when matter is subjected to artificially engineered electromagnetic environments. The goal is to develop a largely unexplored strategy for realizing programmable matter based on coherently combining material excitations with light – realizing half-light half-matter quasiparticles. We hope to answer fundamental questions related to ultimate limits of controlling light-matter interaction and apply these concepts in applications such as quantum simulators, energy harvesting, ultrafast light emitters, and catalysis.

The group consists of post-doctoral researchers, doctoral students, undergraduate and high school students. Alumni from the group have gone to positions in national labs, tenure track faculty positions and post-doctoral positions at internationally renowned institutions. We are always looking for motivated students and post-docs to join us. If you are interested in joining us, do contact Prof. Menon.